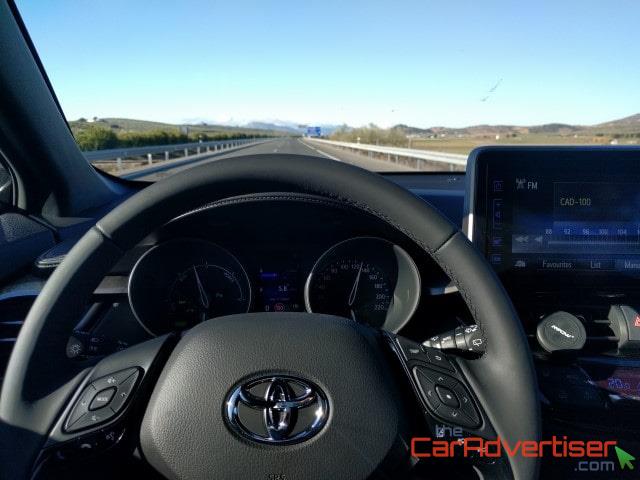 Ever since Toyota come out with the beautiful design of the C-HR (Compact High-Rider) in 2017 I have been eager to get my hands on one. It looks cool and full of driver-assistant features that one would expect from a modern car, but how does it actually perform in real life? I have got a(n almost) brand new (900 km) 1.8 liter hybrid version for a week and covered over 500 miles in city, motorway and mountain roads around Southern Spain. The car is also available with a 1.2 liter turbocharged engine (not hybrid).

The car is just as slick on the inside as it is on the outside. The interior layout is practical, the dashboard is informative with a large touch-screen protruding high up between the driver and passenger, which for me is the most preferable way to peek at the navigation or reverse parking camera while driving as opposed to looking down almost knee-height where some manufacturers decided to place it. Media controls are located on the steering wheel, so you don't need to worry about the touch-screen while driving. When comparing keep in mind that this vehicle's starting price is around £22k.

The low point of this car (as well as some other models from Toyota). I believe the manufacturer loses many customers by only focusing on producing affordable cars with low engine power. They create beautiful, modern cars with eye catching design while losing customers due to the underperforming engines. Another example of this is the Toyota GT86: 200 bhp sounds good at first, but its (about) 8 second acceleration time from 0 to 60 mph is not far off its (sort-of) predecessor, the Toyota Celica, which can produce very similar results with a 1.8 VVT-i engine outputting roughly 140 horsepower. If only Toyota made the GT86 a bit more powerful (like 240+ bhp). Now back to the C-HR...

My initial enthusiasm from playing with all the cool controls quickly faded away as I realized it just does not have enough pulling power. While driving in the city and on the motorway at (mostly) constant speeds I had no complaints, but trying to overtake a sluggish bus on a slight uphill mountainside the accelerator just turned into a volume control. You can actually hear the engine struggling while trying to accelerate. Can't defy the facts: 122 horsepower will only get you 11 seconds from 0 to 60 mph in a 1.5 ton SUV and it's anything, but fast.

This is where the Toyota C-HR shines, it comes with all the useful and safety features a regular driver can wish for.

There are sensors all around the car to detect obstacles and other moving objects (cars, motorcycles, pedestrians, etc...). In some cases it can also get annoying and I am not sure whether there is a way of turning the constants beeping off. For example when a motorcycle passes on the side at a traffic light to stop near the front the car keeps beeping constantly even after the biker stopped.

I found this to be the most handy safety feature of the car. Yellow lights shaped as two cars get lit up on the end of the side mirror when a passing vehicle is detected. It is intelligent enough not to display a warning when you pass another vehicle and it's safe to change lanes back in front of it. Neither the lights nor the sensors would show danger if just passing by parked cars or driving in a tight parking garage. It is useful due to the limited visibility of closely passing motorcycles especially on the passenger side as the car sits higher and rear windows are smaller.

The cruise controls are located on a lever behind the steering wheel below the windshield wiper lever. A button at the end needs to pressed to enable it, which in return shows a warning on the dashboard that this feature is for motorway use only. Pulling the lever down is 'SET', which activates the cruise control at the current speed. While activated pulling the lever down decreases or pushing the lever up increases the set speed to its closest increment of 5. For example if we set the speed at 99 pushing it up once sets it to 100, then pushing it again to 105 (then again to 110, etc...) or pulling it down makes it drop to 95 (then 90, 85, etc...). Pulling the lever towards us or applying the brakes deactives it. Pushing the lever upward resumes ('RES') to the previously set speed. When approaching a slower moving vehicle (even on slightly curving roads) the car automatically adjusts its speed to keep a safe following distance and resumes when possible. Be careful when vehicles change lanes in front as the sensors do not seem to detect this movement until the other vehicle is almost fully ahead in the same lane.

There is a P button with a steering wheel sign near the down below the steering wheel. We need to indicate the way we wish to park, press this button and the display will show whether a parking option is available (e.g. parallel). At this point the car takes control of the steering wheel, we just need to control the speed and gears (to move backward/forward). It takes some practice.

I love this on any car and on the C-HR the screen is very large and the view angle is wide enough to see any oncoming traffic while reversing out.

The front cameras recognize road signs (e.g. speed limits) and display them on the dashboard.

The car can be unlocked just be placing your hands on the handle while the key is in close proxmity. The car will automatically unfold the mirrors (and fold them when locking). When the mirrors unfold they project a 'C-HR' logo down to the ground for a short time, which looks cool, also probably appealing in showrooms, but really unnecessary in every day use. The SUV also features a start/stop button, so the key can be kept in your pocket, but be aware that keyless vehicles are targeted by car thieves capturing the signal emitted by the key.

Other handy features are also available e.g. automatic headlights, electric mirrors that I did not talk about as they are quite common nowdays, but if you are thinking of buying one check what comes as standard in your chosens trim level as some of these may be extra.

Real life fuel consumption of the 1.8 hybrid Toyota C-HR is around 50 mpg. After a bit over 500 mile of mixed usage the vehicle showed an average of 5.7 liter/100 km fuel consumption (48.7 mpg). When I picked up the car it showed 5.5 liter (51.36 mpg) average for its first 900 km (560 miles) covered from new. When the engine is stopped the dashboard displays information about the last trip, including time duration, distance covered, average fuel consumption and odometer reading.

Considering running costs it is not cheaper to run this hybrid than any other modern car with the same performance, but you'll pay premium for being an SUV, for example the tyres. The model I tested had 225/50 r18 tyre size, so expect to pay £150+ for each decent quality rubber. 17 inch tyres of the same brand can cost 50% less.

Is a hybrid more economical?

People tend to buy hybrid cars believing they are more eco-friendly and by statistics they are. The idea is burning less fuel thanks to the assistance of the electrical engine and battery cells. In reality just consider this comparison for a second: the Toyota C-HR with its 1.8 liter petrol engine consumes about 5.7 liter of petrol on every 100 km (on average) while other petrol only cars with the same capacity engine take around 6.5-7. Following my previous example, a 1.8 VVT-i Toyota Celica (with a decade older engine and high CO2 emissions) will take around 7 liter while a newer Honda Civic 1.8 i-VTEC does it with approx. 6.5 (still higher CO2 emissions), so the C-HR is about 20% more fuel efficient, but keep in mind also less powerful and both of those cars will outperform the C-HR noticeably (8-9 second from 0-60 mph vs 11 seconds), which in theory should not be the case with the help of the electric engine (instant power output) the C-HR should easily beat them both. If Toyota made its 1.8 engine more powerful to equal the performance of the previously mentioned cars would mean its fuel effeciency would suffer and CO2 emissions increase, making all those figures nearly identical (also consider the weight of the car that plays a role in those figures and they vary by a few hundred kilograms).

So the question to ask is if we have a 1.8 hybrid with practically identical performance and CO2 emissions to a regular 1.8 liter car, what is the actual benefit of also having a battery and electrical engine? When you consider the pollution caused by manufacturing the hybrid, then the deterioration, maintenance costs and environmental effects of disposing of the electrical engine and battery cells the actual environmental benefits of a hybrid becomes doubtful.

If you are concerned about the environmental effects (which all of us should be), look into other modern 1-1.2 liter petrol only cars, that would match the performance of this SUV while also having low CO2 emissions. When purchasing a hybrid (or electric car) keep in mind that all batteries deteriorate (just think of your mobile phone) and with the car aging it will become more apparent while also affecting resale value (I doubt that people will be keen to buy 8+ year old electrical/hybrid cars with near-dead battery cells and cough up thousands just to replace them).

I see hybrids as a stepping stone to the right direction, but currently the benefits are insignificant. They still burn an almost identical amount of fossil fuel compared to their petrol only counterpart without any noticeable performance benefit. Unfortunately this is the result of capitalist hypocrisy as fuel costs a lots of money. A right step into a real eco-friendly direction will come when car manufacturers finally reinvent the engine as we know it and break away from burning billions of liters of gasoline and diesel every day (how about the air car for an idea?). Until then all we can do is buy a vehicle with unnecessarily high fuel consumption and emissions.

At this price point you get a lot of features for your money and if you are keen on the design and wanting an SUV it could be a good choice as long as you find the low performance acceptable, but definitely test drive one first. The every day running costs is outstanding for an SUV, but not better than a regular, smaller size car. Having said that do not expect a lot more space, just because it is an SUV, it is a compact SUV with 377 liters of boot space (whereas a 2011-2017 Honda Civic hatchback has 487 liters). 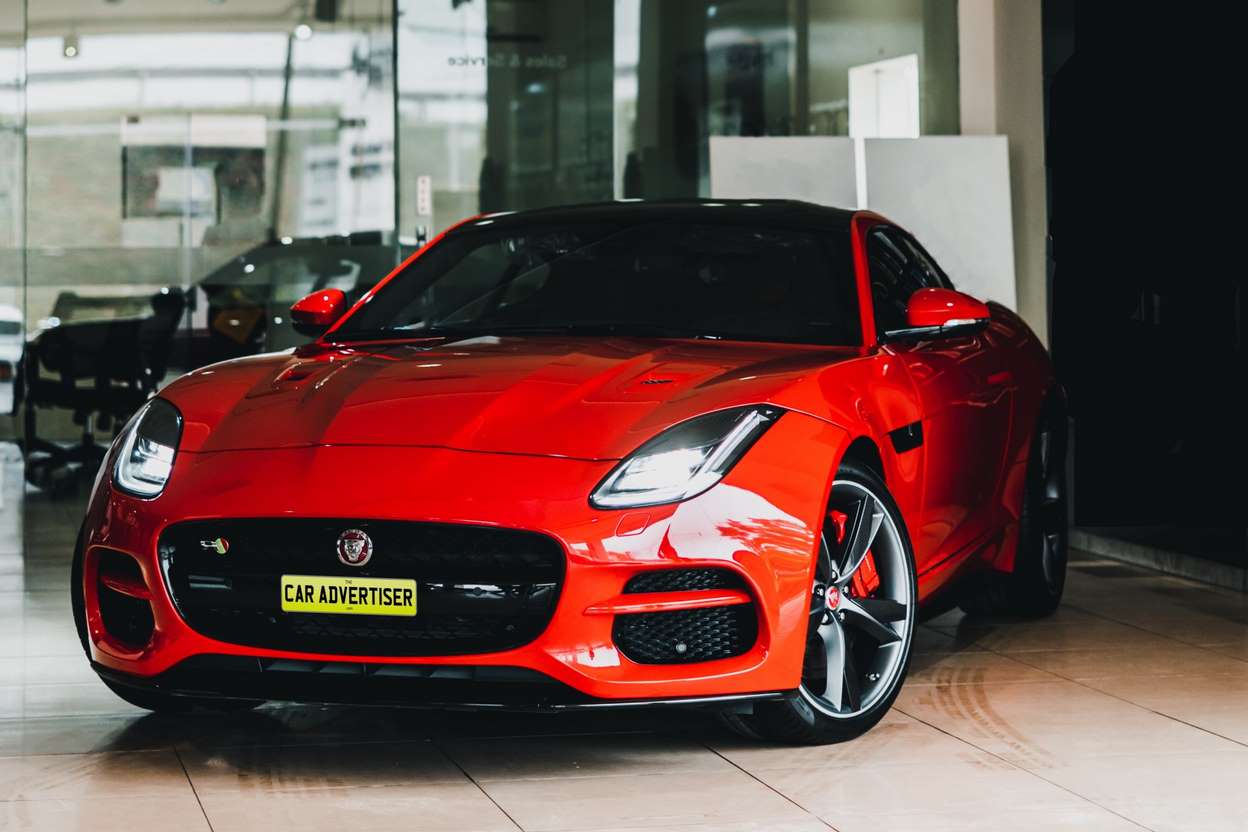 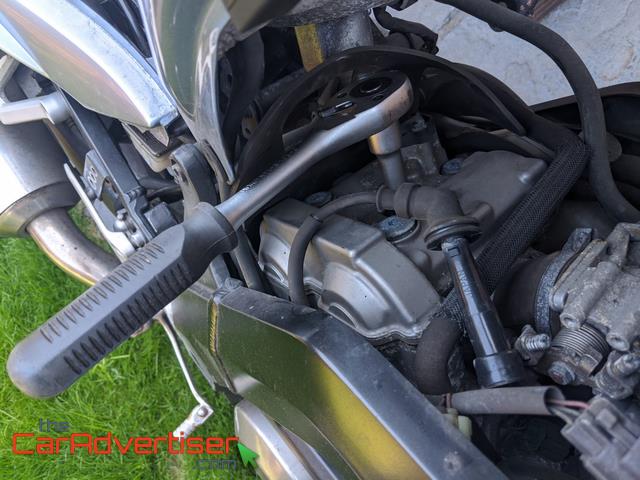 How to replace motorcycle spark plugs? 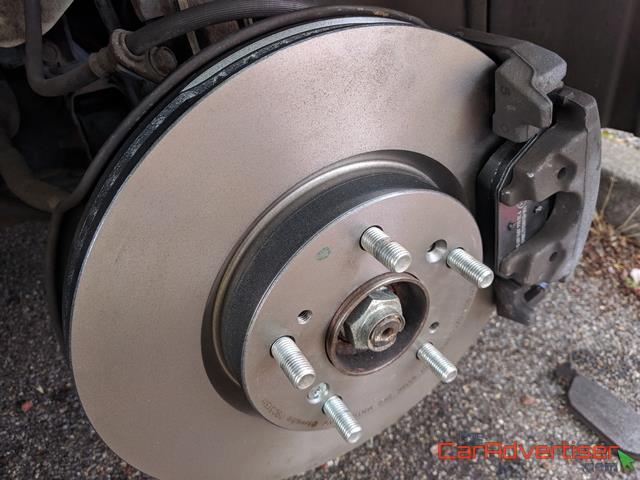 How to replace car brakes and discs? 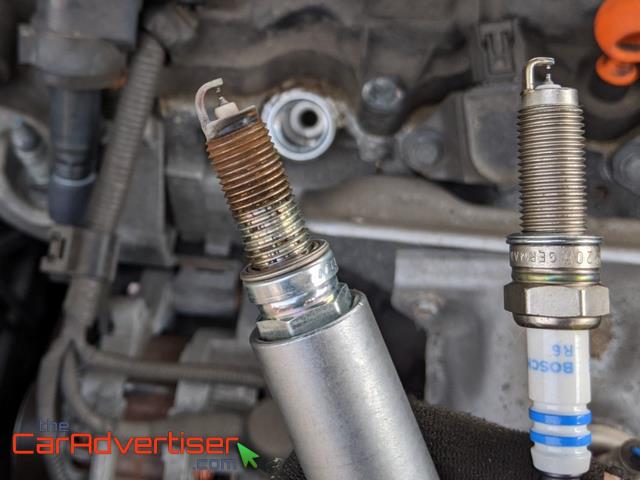 How to change spark plugs? 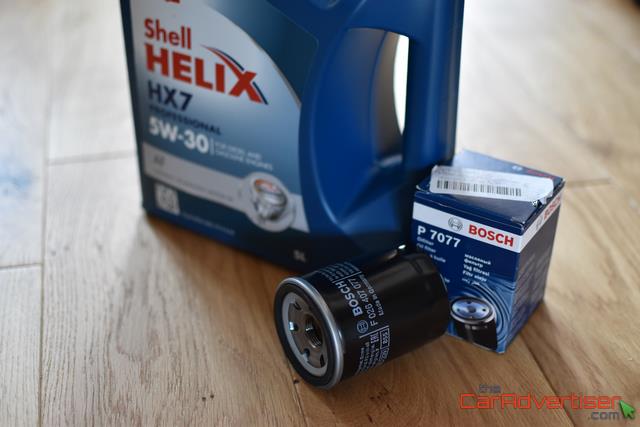 How to change car oil and filter? 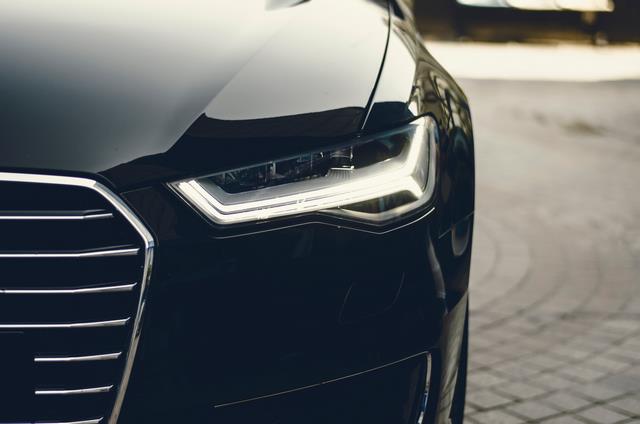